Strife in the Sanctuary 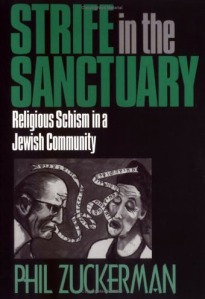 An eminently readable congregational study….Zuckerman’s pursuit of neighborhood drama results in a narrative that unfolds like a novel, complete with characters, plot development, and resolution. Instead of masking the American Jewish experience with statistics and jargon, Zuckerman introduces the reader to the individuals living and shaping, smiling and sweating the American Jewish experience….Zuckerman’s lively style and descriptive tone help to create a vivid picture of the community….Zuckerman’s research yields macro results as well….Community leaders should take note for Zuckerman’ study reveals the struggle of one community with issues that face nearly all contemporary Jewish communities. This congregational schism, claims Zuckerman, is neither unique nor isolated, but typical of a general trend within American Judaism….A fascinating contribution to both the sociology of religious schism and the understanding of the functioning of a congregation in the Western United States. (Joellyn Wallen Zollman, (Brandeis University) American Jewish History)

Strife in the Sanctuary should provide a good read to both those (largely undergraduates) who like a good narrative and those (largely their professors) who might prefer a more theoretical informed account. (J. Alan Winter, (Connecticut College) Contemporary Psychology)

Phil Zuckerman tells an intriguing tale of the religious schism that took place in the Jewish community of Willamette, Oregon. Zuckerman shows us how the conflicting world-views in the community played out in every possible direction, finally producing an Orthodox shul and a progressive, renewal-oriented congregation. Yet he shows too how the dance of separation is still a dance with each other; Zuckerman’s account is nuanced and fun to read. (Tikkun)